An introduction to each bird describes where it lives, its feeding and breeding activities.

The first image in the 5 step-by-step drawing approach is a colour photograph of the bird, so you can see what each bird looks like. This is followed with 4 detailed drawing steps to achieve a finished drawing.

There are four information panels throughout the book. The first one talks about sketching. The remaining panels show the differences between three birds' heads, feathers, and feet depending on where they live and what they eat.

For three of the birds, the step-by-step drawing is taken further into a finished illustration using one of three art mediums - pencil, pencil & gesso, and coloured pencil.

Other topics that are discussed include:- Learning to See, Drawing Skills, Design Skills, Techniques, Materials, with a Glossary and Resources at the back.

The photographs of the nine birds have been supplied by Geoff Moon and Rod Morris, both well known New Zealand natural history photographers.

About the bird book

The journey of the book, Draw New Zealand Birds, began in January 2005, when I received an email from Belynda Smith, the Children's Librarian at Takapuna Library on Auckland's North Shore. She told me there weren't any books available that taught children how to draw New Zealand Birds. She suggested I do one.

I wrote a proposal for a book and sent it to Reed Publishing. They accepted the idea.

I began to work on the book - designing the layout and content of the book, doing the illustrations and writing the text, with Geoff's and Rod's photographs.

I began work and over a period of several months created the content for Draw New Zealand Birds.

With the content of book almost complete, I spent a wonderful afternoon in early April 2006 with 5 young artists and their mothers. I showed them how the art materials worked and explained the drawing process. They worked from the pages of the book and completed 2 - 3 drawings each, while I photographed them doing the drawings. At the end of the afternoon, they chose their favourite drawing and I photographed them holding it up. You will find their photographs throughout the book and on the back cover.

With the content of the book complete, the editor went through it and checked everything. Any changes were made. Next, the images and drawings were scanned at a high resolution. They were put in place on the pages of the book.

Before the book was completed the marketing team from Reed Publishing, researched the market to find that this book would also suit adults who wanted to draw. So the cover was redesigned and final checks were made. Then the book was sent off to the printer to be printed.

The book, Draw New Zealand Birds was released in March 2007.

In 2014, Draw New Zealand Birds was revised and republished under the imprint of Dragonsauce Books. 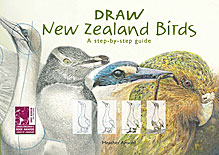 How to draw a Kokako